In the early 90’s, Dr. Madan Kataria was a general practitioner, worked in a hospital in Mumbai and wrote articles for medical journals.

In March 1995, while preparing his article “Laughing- The Best Medicine”, Dr. Kataria discovered numerous scientific studies that described the many benefits of Laughter on the mind and the human body.

Dr. Kataria was particularly impressed by Norman Cousins’ book “Anatomy of a Illness” which explaining the cure thanks to laughter of his announced incurable illness.

His readings on the research work of Dr. Lee Berk demonstrating that laughter reduces the level of stress hormones and explains a clear improvement in the immune system convinced Dc Kataria that more laughter was needed to improve health and cope with the stress of modern life 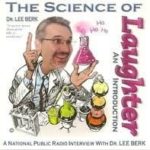 Dr. Kataria immediately decided to test the impact of laughter on himself and others and on March 13, 1995 at 7 am he went to the public park in his neighborhood in Mumbai and launched the first “Laughter Club” with 5 people who decided to meet each day. Within a few days, the small group quickly moved to more than 50 participants.   During the initial meetings, the group was a circle with a person in the center, to tell a joke or a funny story. Everyone appreciated and felt good for the rest of the day. But after two weeks, the stock of good jokes and stories was exhausted and naughty or sarcastic jokes were told. Two feeling offended participants complained that it would be better to interrupt the Club rather than continue this kind of jokes. Dr. Kataria asked the members of the “Club” to give him a day to develop a “solution” that would solve the crisis.

That night Dr. Kataria reviewed his research and found the answer: “Our body can not differentiate between authentic laughter and false laughter, both produce the same” good biochemistry. “ The next morning he explained it to the group and asked them to try to “play” like an artificial laugh with him for a minute. Despite skepticism, the group members tried. In a short time the contagious laughter passed to the others and the group was laughing like never before and this for nearly ten minutes.

Dr. Kataria then decided to develop a range of laughter exercises, including role-playing elements and other techniques learned from his experience as a drama actor. Dc Kataria’s  wife Madhuri was a Pranayama yoga teacher. As they worked together on creating working laughter exercises, they found similarities in breathing so the couple incorporated elements of this ancient form of yoga into laughter exercises. The ” LAUGHTER YOGA” was born. 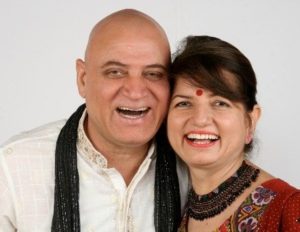 Some time later Dr. Kataria ceased his activity of medical practice to devote himself to the teaching and the promotion of the LAUGHTER YOGA in order to spread his easy and beneficial method for the health and well-being for a larger public… training Leaders and creating clubs in other parks and other cities in India. 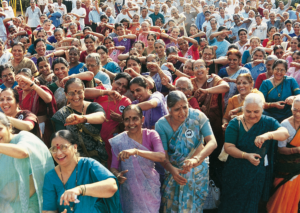 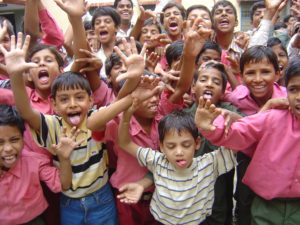 1999: Dr. Kataria received an invitation from the American psychologist Steve Wilson to visit the United States for 6 weeks to make discover LAUGHTER YOGA and subsequently, the first laughter clubs opened outside India.

2001 JANUARY 1: More than 10,000 people gathered in Copenhagen, Denmark, and laughed for a whole hour to greet the new millennium.

Dr. Kataria opened his International Yoga University www.laughteronlineuniversity.com training masters who now  train teachers who train leaders who make LAUGHTER YOGA practice to millions of people in more than 105 countries all over the world today.

Pauline Fung “Gogogo” in Hong Kong,  with Fabrice Loizeau in France are in the first 20 experts trained by Dr. Kataria who continues to travel the world and develop LAUGHTER YOGA exercises.

He also organizes many events  such the “International Day of Laughter” the 1st May to allow to make known and diffuse this beneficial method. https://laughteryoga.org/fr/

I met Fabrice Loizeau in Rennes in France in 2012, after my “around the world tour” during a busyness transition training. As I am curious, always willing to laugh more, and looking to learn I went to a session to discover this new technic, and that’s when I had to move for the third time to Hong-Kong.

March 2015 I met Paulin fung and was lucky to be invited to a general meeting with Dc Kataria in Hong-Kong, and I could not resist the “temptation” to get more LAUGHTERS in my life. 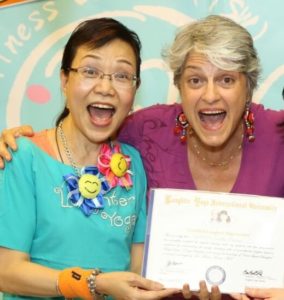 July 2015  Laughter teacher training with Fabrice Loizeau in Rennes France with a great team of Leaders who all became Teachers !

Volunteering in a retirement home in Hong Kong. 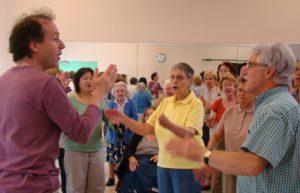 Monthly calender for sessions for associations and companies. 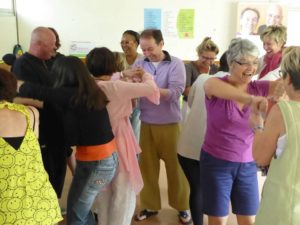 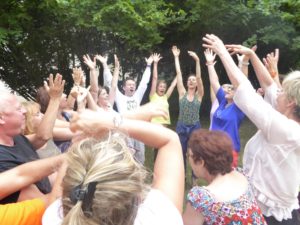 Volunteering or working with Gogogo in Hong-kong, for elderlies houses and Laughter International day. 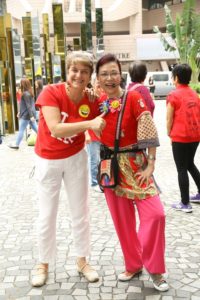 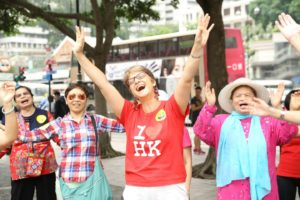 Monthly calender for sessions for associations and companies. Check calendar