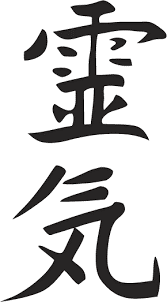 REIKI is the japanese term since ancient times for the concept of “Universal energy” or “Universal Force of Life”, or “Pure conscious of The Universe” which is the reason of all living beings. It is the equivalent of Chinese “qi” and Indian “Prana” and hawaïan “Mana” .

If we look inside our body, we are made of cells, which are composed by atoms, and the further we go in the inner, we attain energy, the same appears if we travel out of our body to the infinity of universe…

The use of “Vital energy” for hand healing modalities exists for thousands of years. Our ancestors were living within Nature, they could feel, interprete with the Nature and could heal themselves with herbs, or hand touch. Some techniques have been passed through generation over the time, even if the western techniques supported and proved by scientists took a most important place in the 19’s century.

Reiki’s history begins with its founder, Dr. Mikao Usui, who wanted to develop not only a healing method but one to help improving ones quality of life in general and allow the aim to attain “the ultimate peace of mind”  Anshin-Ritsumei).

That happened at this time of changes in Japan, when people were looking to a non religious spiritual system accessible to everyone. Dr Usui, also called “Usui Sensei” tought his modalities to “students” who became masters and forwarded the knowledge but mostly the ability of practicing and transmitting the Reiki.

Nowadays, Reiki has spread around the world and every year, more people learn to practice this self or others healing modality.

Dr. Mikao Usui (1865-1926) was born in a wealthy Buddhist family. Mikao was given a well-rounded education for the time, he studied in a Buddhist monastery where he was taught martial arts, swordsmanship, and the Kiko (Japanese equivalent of the chinese shi Kong). Throughout his education, Mikao Usui had an interest in medicine, psychology and theology. He sought to find a method to heal himself and others using the laying on of hands, that would not be attached to any specific religion or religious belief, so that his system would be accessible to everyone.

Dr. Usui studied healing systems of all types during trips in Europe, America and China and held different professions including reporter, secretary, missionary, public servant and guard to subside his travels.

In 1922 at the age of 57 Usui had already a long path experience on spirituality and wanted to retreat for 21 days for “Meditation of Lotus Repentance”. He went to Mont Kurmama Temple (Kyoto) where he fasted, meditated and prayed. On the morning of the twenty-first day, Usui experienced an event that would change his life forever. He saw ancient Sanskrit symbols that helped him develop the system of healing he had been struggling to invent; but he alsofelt a strong Reiki or light over his head, and felt unconcious.

In the morning he felt as he had been spiritualy awakened at the same time as feeling “being the energy and conciousness of the universe”, like if he had been given the enlightment like Buddha : he had received the gift of healing. As soon as he tried on his own body and his family members it brought an immediate result. 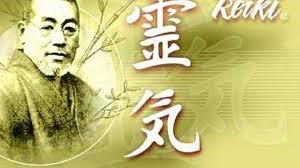 He then wanted to share with other people and in april 1922 he opened an institute in Tokyo (Usui Reiki Ryoho Gakkai Society) for teaching Reiki Ryoho healing method and practice on public. People transmitted word to mouth and soon, people came from further and further villages for guidance and cure.

Dr Usui then developed many practitioner technics and a formal attunement method “Reiju Kai”, to make Reiki learning practise easier and trainings to become teacher. Before he died, Dr. Usui had taught to over 2000 people 21 of which had reached “Shinpiden” the Master level to ensure that his system would not be lost but transmitted.

Dr. Hayashi (1880-1940) was a retired naval officer and surgeon. In 1925 he received attunement from Usui Sensei who tought him Reiki. Hayashi became  Shihan (Master) and opened a clinic. He is credited with implementing more methods to enhance the effects or Reiki Ryoho by adding more science based hand positions to more thoroughly cover the body. When Usui Sensei focused on head, abdominal and spinel area, Hayashi Sensei included energy centres such as chakra (from India),and  meridians based on chinese Medicine. He also changed and refined the attunement process and trained several more Reiki Masters, counting Mrs Takata. Hawayo Takata (1900-1980) was born in 1900 born in Hawai from a Japanese family. After her husband and her sister’s death she was left alone to look after her two daughters. Soon she was diagnosed with cancer and recommended to get surgery. During a trip in Tokyo in 1935, she strongly felt through her instinct that she didn’t need that surgery to be healed. When asking her doctor about alternative treatments for her condition, she was told about the Reiki practitioner in town. Mrs. Takata had never heard of Reiki and was skeptical, but she made an appointment with Dr. Hayashi, and she received a treatment on a weekly basis. She found the sessions to be relaxing and pleasant and, ultimately, healing. She went for healing and in 8 months was completely cured. She was amazed of the result and asked the Dr Hayashi to teach her how to transmit Reiki energies to others. Mrs. Takata learned was then taught Reiki One and Reiki Two.

When she returned to the United States, she continued to practice Reiki and eventually became a Reiki Master when Doctor Hayshi Chujiro came to visit her clinic in 1940.

Mrs. Takata wanted to spread her healing system to others. She continued to practice Reiki for many years and attuned 22 Reiki masters. It is from these Teachers that Reiki has spread throughout the West.

Reiki Spreading to the west

Two techniques were developped: one by Philip Lei Furumoto “The Reiki Alliance” and one by Takata’s niece Barbara Lay “The Radiance technique” who have then trained new Masters and practitioners who practice either for themselves or to heal others. As many techniques, practitionners go on adding their own modalities and enrich Reiki with new elements and ways of practices, so reiki has variations.

Today there is two major branches of Reiki, the western and the Japanese one.

Back to Japan Before World war II Reiki had been spread through Japan, taught by Masters trained by Usui Sensei and Dr Hayasi. But after World War II, Commandant Mac Arthur on behalf of American Government made pressure on Hirohito emperor and Japanese people to collaborate, so politic and social reforms were imposed and enacted, such prohibiting oriental medicines. It was said that the Reiki was no longer practiced and disappeared from Japan. But we now know that some masters practiced and secretly transmitted their methods.

NPO Japan Reiki Association then opened branches in Tokyo and Kobe and overseas branches in Canada, India and Hong-Kong. This is where I Received attunement from Satoe Sasaki and passed Level I-II and III.

Taditional Japanese level III is not to be a Master or teacher, it is the lost level in western technique, it provides a Spiritual enhancement). I have till then, felt a sort of “empowering” not only during my practices but in my daily life.

In June 2019, after one year training, I became Teacher – master in order to fulfil my wish to teach to as many people as I can.

My aim is for them and you to get to know how to use this simple, easy, natural method using energy in order that more people will get supported to their wellness as wished Mikao Usui San.

I am honoured to be the ambassador in France from NPO Japanese Reiki Association.